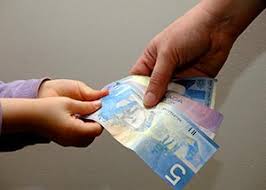 The laws governing the calculation of child support in Canada are shared by the provinces and territories, together with the federal government.

The Federal Child Support Guidelines consist of a set of rules and tables for calculating the amount of support that the paying party should contribute toward his children. The guidelines are intended to make the calculation of child support fair, predictable and consistent for the benefit of the children.

Basically, the amount of child support awarded depends upon; the income of each parent; the number of children; custody time; and additional expenses to meet the children’s needs, if any.

The amounts in the Federal Child Support Tables vary from one province to another because of differences in provincial income tax rates. As regards tax treatment, the tables reflect the fact that child support payments are not taxable in the hands of the receiving parent and not deductible by the paying parent.

To find child support amounts in the Federal Child Support Tables, you must identify 3 items:

The Federal Child Support Guidelines include other rules for using the tables, depending on the type of custody arrangement.

Note, however, that the Guidelines are just that: child support amounts can be adjusted to recognize a child’s special expenses or to prevent undue financial hardship for a parent or a child in certain circumstances. For example, more child support might be appropriate to cover child care costs where these costs are reasonable and necessary.

The Guidelines recognize that as a general rule, families with higher income spend more on their children. Therefore, the paying parent’s child support sum is set in accordance with the average proportion of income that a parent at that income level spends on their children. In broad terms, the guidelines ask “what would a parent with this income usually spend on his or her children?” and support payments are set accordingly.

Parents can agree amongst themselves, on the amount of child support, with the help of a mediator/lawyer. If the parents file an agreement with the court regarding child support, the judge will:

Usually, only the income of the paying parent is necessary to apply the tables. However, the receiving party will have to provide income information in certain circumstances, for example, if either party is claiming undue hardship, or if there is split or shared custody.

If the income level of the paying parent changes, either parent may decide that it is appropriate to change the amount of child support. This can be done by agreement or by court order. (The paying parent does have an obligation to advise the receiving parent if there is a material change in circumstance, including, for example, a large salary increase).

If the paying parent is reluctant to provide the necessary financial documents, and for example, refuses to supply the documents needed to prove income, the court may order that he or she do so or face serious penalties. The penalties could include being found in contempt of court or having to pay the other parent’s legal costs.

In Canada, the provinces and territories are primarily responsible for child support enforcement. Each province and territory has its own maintenance enforcement program.

In order to receive help from an enforcement program, the parent wanting to enforce the child support payment must register a child support order or agreement with the program in her province or territory. If child support is not paid, the program can use a number of methods to enforce the order. For example, some provinces have introduced driver’s license denial programs. If you have a concern that you will require the enforcement of your child support or order, you may want to contact the appropriate office in your province or territory to obtain a registration application see Provincial and Territorial Maintenance Enforcement Programs at Justice Canada.

The federal government also has some legislation to help provide the provinces and territories with the tools necessary to enforce child support parents for those parents registered in the respective programs: the Garnishment, Attachment and Pension Division Act and the Family Orders and Agreements Enforcement Assistance Act.

Federal legislation allows the provinces and territories to request the screening of specified federal databanks, including those of the Canada Revenue Agency, to locate parents who are behind in their support. Also, once the provincial and territorial programs have exhausted all other remedies, federal law allows them to ask the federal government to deny specified federally regulated licenses to paying parents in “persistent arrears”. These licenses includes passports and certain aviation and marine licenses.