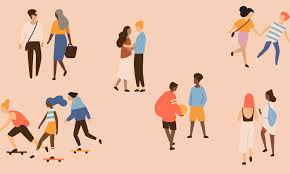 I see many young, idealistic people rushing into marriage and becoming sorely disappointed once the infatuation has died and they have settled into their daily routines. They find out that their ideal mate actually has an annoying nail-biting habit, and maybe a strange obsession with keeping trash cans clean, or using their shoes as a savings account – rather than the bank (true story, I’m not making this up).

And then there are all these people who feel like they need to get married at a certain time. Just because you are in a relationship with someone at 25 and you want to get the move on having children before your biological clock ticks away doesn’t mean that you should be with that person. It doesn’t even me that person would make a good parent for your unborn child!

I already have two friends who are divorced at the age of 24.

One of them mistakenly married the shoe-banker.

The other had expectations of her husband that he couldn’t meet. While they were dating, he sent her flowers every week, took her out to fancy restaurants, and maybe even bought her a poodle once in a while. After they were engaged, he expressed his concerns to her that she wasn’t ready for marriage. She insisted that she was. When they got married, he stopped buying her things. They needed to save money for a house, so she couldn’t go shopping for clothes as often. She no longer received flowers at work. When she got home from work, he would say, “babe, this place is a mess,” and expect her to clean it. “I worked just as hard as he did! If he thought it was such a mess, he could clean it, too!” she told me. At last, she realized she wasn’t happy, so she got a divorce.

The truth is, if you think about what these two people wanted and expected, then you would realize that it wasn’t going to work out from the beginning. She needed romance and adventure. He needed financial stability. If they had been honest with themselves about what they wanted, and about what their partner wanted, they would have realized that they were not right for each other – not at that time, at least.

But some marriages do work. I have seen other young couples happily married. These are the ones that are obviously committed to each other and to being together. My friend once twisted her ankle. Her then-boyfriend-now-husband took a week off from work to take care of her and cook for her. Since she is Indian and he wanted to be truly part of her culture and her family, he learned how to play the sitar for 9 months so that they could perform together at their wedding.

That is the sort of maturity, commitment, and devotion that is required to make a relationship last and a marriage work.

After hearing reasons for failed relationships as well as for successful ones, I have come to the following conclusion: marriage is like a business relationship with your best friend. Having fun and confiding in each other is key, but you also need to make sure you are compatible on a variety of levels – religion, family values, career. Then, see if you can really live together – all those annoying habits and pet peeves included. If your goals for the future don’t match, then how can you expect to stay together for a lifetime?

“Love does not consist of simply gazing at each other, but in gazing outward together in the same direction.” –Antoine de Saint-Exupery

So, once you have found that person you think you can spend your life with, what’s the rush? You’ve already found them. Get to know them; you have the rest of your lives to spend together.